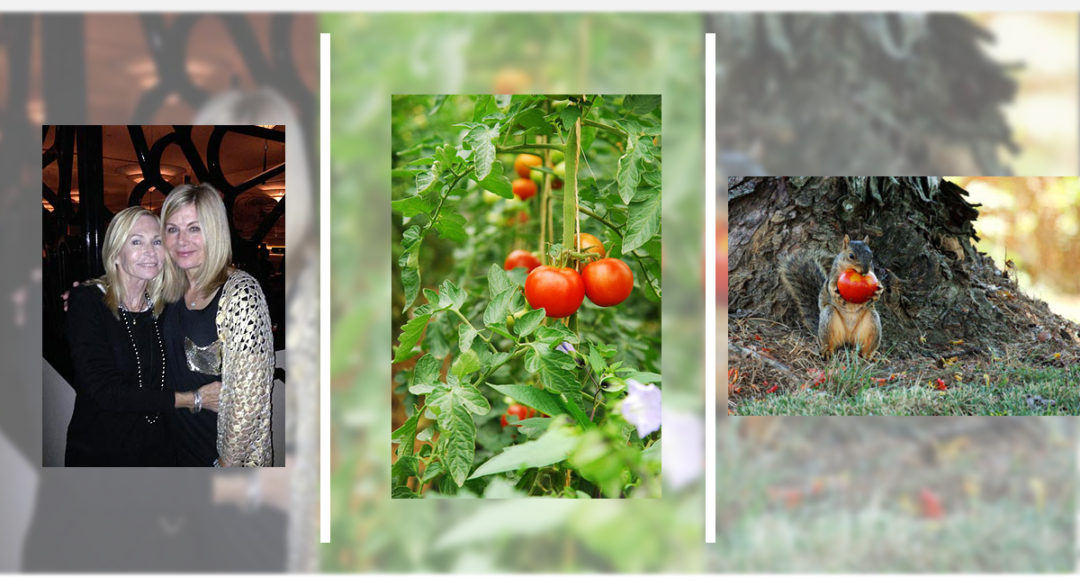 The lovely story I posted the other week by my dear friend Annie, growing tomatoes in the heart of Beverly Hills, has ended in tears. Annie was in London for  a day or 2 and relayed the story of…duh duh duh…the squirrel from hell!

So here is Part 2…a sorry tale of woe and crushed dreams…and nicked tomatoes! (If you missed Part 1, take a peek under Guest Articles) 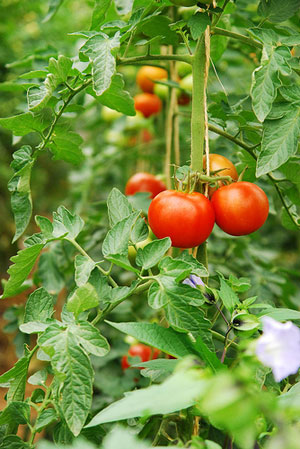 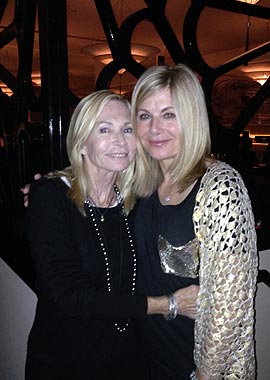 You had the nice. Now here’s the not so nice. I recently wrote about finding peace, love, and deeper friendship through agriculture; specifically, growing tomatoes with my friend Mark. Peace, love and light through Heirlooms. It was a lovely piece. Upbeat and cheery, not too “come to the commune”. Just right for a lazy morning read over coffee.

That was before. Before death and destruction arrived. Before my nightly ritual of spraying Simple Green natural product detergent and decorating the chicken wire fencing with sheets of fabric softener got upped to saving the fort status. Before the arrival of …The Squirrel from Hell.

At first I thought my nemesis was a rat. A canyon rat. Can’t be helped here in the canyons there are actually hill mice (rats to my mind) and we do have to deal with them. So I set about dealing with this one, or two with all of the tools I could muster thanks to Google. SOS aka Brillo pads around every single crevice of my planter that I thought they could squeeze through, was my particular favorite.

The blue grey fat squares mixed nicely with the white sheets of fabric softener which I also was led to believe would do the trick. When our weekly housekeeper came and wondered where her supplies had disappeared to I casually said, forget laundry, forget the dishes, I‘ll take care of you come harvest time!

I stopped Mike the Western Exterminator Man when I saw him down the road and asked him for advice, knowing if it’s one thing a guy in the canyon wearing a bright orange Western Exterminator jumpsuit is going to know, it’s how to get rid of hill rats. Mike, God love him, did not disappoint. After rattling off a few ways that would surely put my dogs into a coma if not kill my little one out right, I got the gold!

“Mice” and “I suppose rats too” to quote Mike, won’t go near human hair. Easy peasy. We all need a trim around here anyway. My daughter being awfully fond of trimming her ends was more than happy to oblige me by saving her cuttings right on her bathroom floor where she left them for me to sweep up and use to my hearts content. As much as I value a good trim (always, and good shoes, as well), I began to supplement hers with my own snippets when needed so that every night I had a proper supply of ammunition. 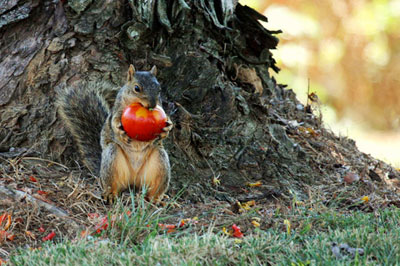 Every night I’d go to bed, praying I’d secured the situation well enough. I’d fall off to sleep with lips moving; patron saint of tomatoes hear my prayer. Every morning I’d get up and before brushing my teeth or splashing water on my face, go out to the garden holding my breath. Every morning at least one carcass and tell tale tomato, left wounded and bitten, greeted me as proof of my unanswered prayers.

This destruction brought with it despair. Yes, and frustration. Many a morning I’ve cried out with new and improved ways of using the F word. I’d be on the verge of giving up completely when my Irish would kick in and the frustration turned to anger. I wasn’t going to be beaten by a lousy hill rat. No Siree! And then I saw it…the Squirrel from Hell. Right there, inside my chicken wired planter, two tiny squirrel paws reaching for a small green ball that with luck could become a large red ball some call a fruit and others, a vegetable. Not being one to argue over a word choice at this point, I just let the F word fly fast and furious, chasing the culprit out of the planter and down the hill. Even though I saw him squeeze out of the planter with my own eyes, I marveled at how he could get his body in and out of the planter, wired to the hilt as it is, but the bastard did it. Apologies to hill rats one and all.

That was a week ago. Since then I have become a different person. Once I was the animal loving, with harm to none, wouldn’t wear fur even in zero below, gal. Today, that woman’s gone. She’s been replaced by a crazed woman channeling one of the night watchmen on the “Game of Thrones”, alert and armed and ready to defend my WALL (aka, planters!) 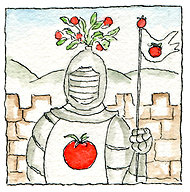 My dogs are angry with me. Since the first sighting their life too has changed. No more lounging around indoors. No more lazy days napping on my bed or the living room couch or hanging around the kitchen big eyed waiting for a handout. Over! One’s a Jack Russell mix the other is a full fledged fat lab, both retrievers and it was time to be what God made them to be!

And let me say this; I started out nice. A friend from yoga suggested the squirrel was thirsty and going for the tomatoes to quench his thirst. Fine. I put a one of those clay pot saucers filled with water out for the thief. Thinking, well if it’s thirsty it’s probably hungry, I put nuts out too. A little generosity goes a long way was my thinking. The water’s been dipped into and the nuts all disappear nightly. Along with my tomatoes. Forget advice from the down dog crowd.

Oh Please, I’ve Googled every home remedy for ridding one’s garden of squirrels known to man. With the time I’ve spent Googling I could’ve written a novella. (Tales of a Serial Squirrel Killer has a nice ring). The battle still rages but I haven’t raised the white flag. I am many things, but one thing I’m not is a quitter.

Sadly, I’m not a squirrel killer either as much as I’d like to seriously blow this one to bits, buck teeth and bushy tail and all. So maybe instead of the longed for “bumper crop” I referred to in my first piece about this tomato growing adventure, I’ll have to settle for a few tomatoes sandwiches this season.

Well there’s always the Wednesday Santa Monica Farmers Market. Both the dogs and my housekeeper say “Yeah” to that!

LA based Writer, Annie Stein, has written for C and More Magazines, NYTimes and is a regular blogger on Huffington Post. She runs creative writing workshops for at risk teens.