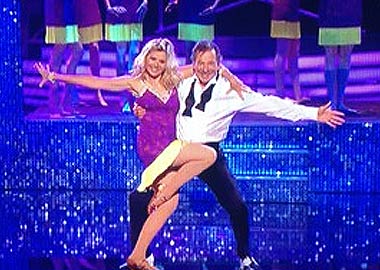 We cha cha cha’d, we shook our booty, we danced ourselves into a frenzy but……failed to impress the judges! Wayne Sleep was lovely and fair as ever but the others seemed to have it in for my man! They gave him no credit whatever in learning a very fast and furious dance in 4 days! They threw insults at him and he got mad, stood his ground, and gave as good as he got! He then, hilariously, decided to score himself and declared that he gave himself an 8 out of 10!! Their scores were very very different and even with amazing public support, we went out. Our scores were so ridiculously lower than everyone else’s we didn’t stand a chance. It’s been a roller coaster ride of fun, fear, hard work, and insane pressure and it was inevitable that we would leave soon as some of the other dancers are magnificent. However, we did feel it would have been a bit fairer if everyone’s personal starting point in 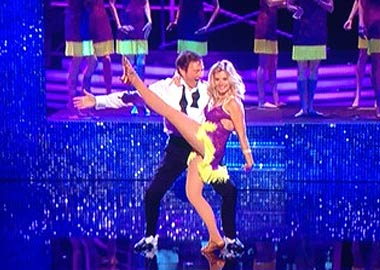 Having said that we met some amazing people. All the couples got on fantastically and each week on stage was a bit like a party. We’ve made some friends there and hope that we’ll see lots more of them from now on. The team behind the scenes were beyond magnificent. Faye Sawyer and her team of talented ladies worked at an unbelievable pace to create all the costumes each week. They went way beyond the call of duty and they have our heartfelt  thanks for all they did. Natalya Nair and her make up team were just incredible too. They preened, pampered and provided a haven in the midst of chaos and made us all into dance goddesses! Ditto for Paul and his awesome hair team! We were also followed by a small crew 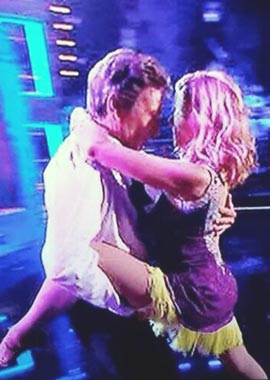 trying to film our every conversation, rehearsal etc and we tortured them by trying to escape them most of the time. However, they were all so nice and supportive that in the end we just let it all hang out for them. The producers have a huge and complicated job of pulling all the elements together and I don’t envy them this task.

I would also like to thank all the fans who supported us, voted for us, came to watch us and even sent in photos they took off the television! Also to Di for all the You Tube footage.

It was great fun and very fitting to be back together on ITV where it all began for Michael and me in 1984 with Dempsey & Makepeace. And they said it wouldn’t last!

So here, ladies & gentleman, is our final dance: