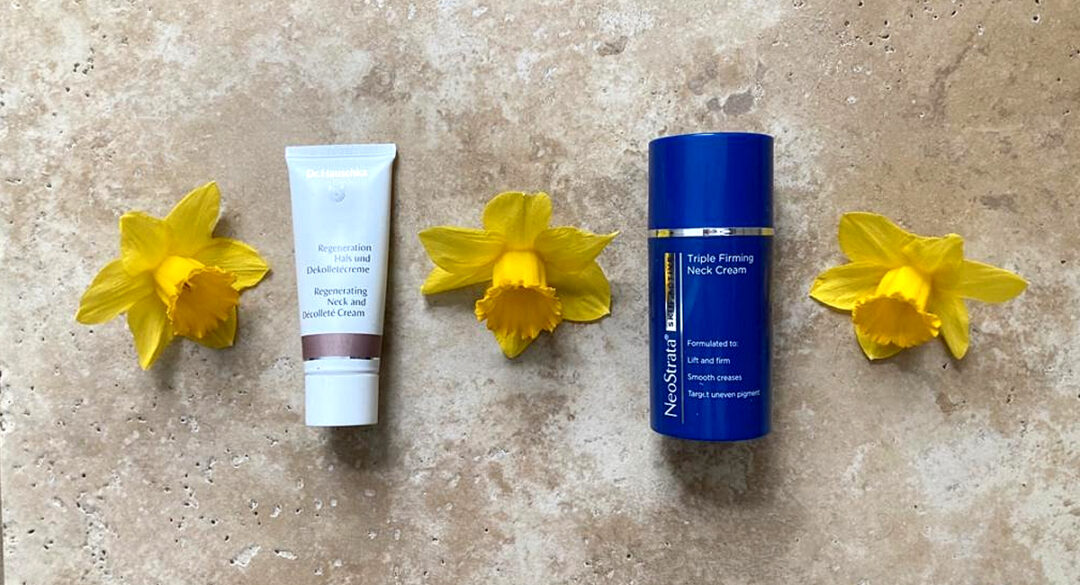 It’s a strange thing and I really can’t explain it but I’m ashamed to say I have neglected the whole area beneath my chin. I mean my neck has had the occasional bit of oil or moisturiser but that’s it. And as for the décolleté? Nothing whatsoever. My neck and décolleté have been left to their own devices and are now getting their revenge. Specially the décolleté.

And by age I mean late twenties! That’s the age teeny little lines begin to show on the chest and the childlike smoothness begins to disappear.

Mine has always been noticeable when I squeeze my arms together or lean forward (not a good look anyway) but I never really noticed it when I was just standing up straight. Until recently. I was horrified when I was washing my face one night and glanced down to see a chest full of lines.

How on earth could I have not noticed those lines before?

So of course I immediately decided to see if there was any cream that could make a difference. But to be honest, I wasn’t hopeful

I asked my skin guru, Jessica, at The Harley Street Skin Clinic for advice and she assured me that certain products could definitely help. I went home with one by NeoStrata a little more hopeful than before but not really believing it would make much difference. How wrong I was!

I could just kick myself that I didn’t take a before photo because the results are real. I was gobsmacked.

When that one finished I wanted to see if I could find a natural and organic alternative. Which I did.

I could not be more impressed with this product. Specially formulated to firm sagging skin and tackle age spots in the neck area, it has done me some serious smoothing.

I use it in the evening, starting in the area between my breasts and continuing over the whole chest area and up the neck to the jawline. It’s a very rich cream (but absorbs quickly) and a fairly small amount goes a long way. It has literally smoothed the chest area to such a degree I can’t quite believe it. When I bend over or squeeze arms together then the lines are still there and sometimes in the morning there are a few lines (I mean this isn’t surgery) but it is noticeably and very visibly smoother.

It’s not cheap at £67 but the tube lasted me 4 months which is pretty good going considering the size of the area it was covering. It actually says to use twice a day but Jessica said to just use in the evening and that’s what I did. Worth every penny in my book.

This is also formulated to firm the skin and minimise the appearance of wrinkles. Containing macadamia and argan oils as well as marsh mallow and birch leaves this is a seriously hydrating cream. It says to use in the morning but I continued it as an evening routine. Of course when I started using this my skin was already smoother from the NeoStrata but the smoothness continued and my décolletage is loving it. This has the added benefit of being all natural with no unwanted chemicals and is a bit cheaper at £51.